Interview With A Neurologist: UNDERSTANDING CAUSES OF SUDEP 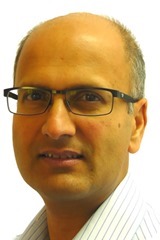 Sanjay Sisodiya is an academic-clinical neurologist, whose research interests in refractory epilepsy are driven by clinical imperatives. He employs neuropathological, imaging and genomic analyses to study the causes, mechanisms and consequences of refractory epilepsy in humans.
Most recently, pharmacogenomic, individual- and population-based genomic studies have begun to unravel the complexities of epilepsy biology, highlighting the need for multidisciplinary studies in well-characterised patients.
Genomic and post-genomic studies, as windows to disease biology, now constitute his main research focus.

What is sudden unexpected death in epilepsy (SUDEP)?

Currently, the accepted definition of SUDEP is the sudden unexpected witnessed or unwitnessed, non-traumatic and non-drowning death in people with epilepsy, with or without evidence of a seizure. It doesn’t necessarily have to be in the known context of a seizure, excluding documented status epilepticus, where people have seizure after seizure.

Typically, what happens is that someone who’s known to have epilepsy is found to have died without any obvious explanation as to why. Even a post-mortem examination doesn’t reveal a structural or toxicological cause of death. It may or may not be known whether a seizure had occurred and no other cause of death has been identified.

How many people’s lives are taken by SUDEP each year?

In 2013, about 680 deaths were attributed to SUDEP in the UK. If you look at it at a population level, the studies suggest it probably affects about 1 in 1000 patients with epilepsy each year. It depends on the severity of the epilepsy. For example, if you’re looking at people who’ve got epilepsy that’s resistant to drug treatment and who are also not candidates for surgical treatment, then that can rise to as high as 6 to 7 per 1000 people with epilepsy per year.

Why is SUDEP more common in certain types of epilepsy such as Dravet Syndrome?

That’s a good question. I don’t think we have the answer to that question actually and I guess that is partly why we’re doing this research. We know that there are some associated risk factors such as having poorly controlled epilepsy, especially generalized tonic-clonic (or grand mal, convulsive) seizures.

Other risk factors that have been suggested include being male, having an intellectual disability and having seizures that occur during sleep. We don’t necessarily understand the mechanisms behind these factors.

We also know that there are some epilepsies which have an increased incidence of SUDEP and Dravet syndrome is one of those. We know most people with Dravet syndrome have a mutation in a gene called SCN1A, but we don’t know whether the increased risk of SUDEP is linked to having that gene mutation or whether it is due to the epilepsy typically being severe in that condition. We don’t know which of those might be relevant, if either. That’s why people have been trying to understand what lies beneath the risk factors.

Is a lot of research focussing on this area at present?

That’s right. For example, an important study called the MORTEMUS study looked at people who had been admitted to hospital specifically for the recording of their seizures, typically for pre-surgical evaluation. These are people who are in a hospital bed and they are intensively monitored by video. They have EEG electrodes on and they may have their ECG and breathing measured.

A very small proportion of people who have this investigation unfortunately have a seizure followed by SUDEP and the study was able to look at all a number of measures around the time that SUDEP occurred. One of the key findings was that the pre-terminal events were cardiorespiratory, but how those cardiorespiratory events arise is not clear.

More recent work published suggested that there can be a process of spreading depression in the brain stem in the immediate pre-terminal period, so that would fall in line with there being problems with cardiorespiratory regulation systems. However, it still doesn’t tell us why that happens, so although we’re getting close to establishing the mechanisms , we still don’t understand why it happens or why it happens with one seizure and not another.

Are there other causes of premature death in people with epilepsy?

Not all premature death in epilepsy is due to SUDEP. There are other causes and we know that epilepsy can reduce longevity. Among people in whom seizures have been controlled, there can still be a higher risk of mortality at a given age and other factors are involved.

We know other obvious causes of death such as drowning and burns related to seizures, but there are other reasons and we know, for example, that psychiatric comorbidity also appears to be associated with an increased risk of premature death in epilepsy.