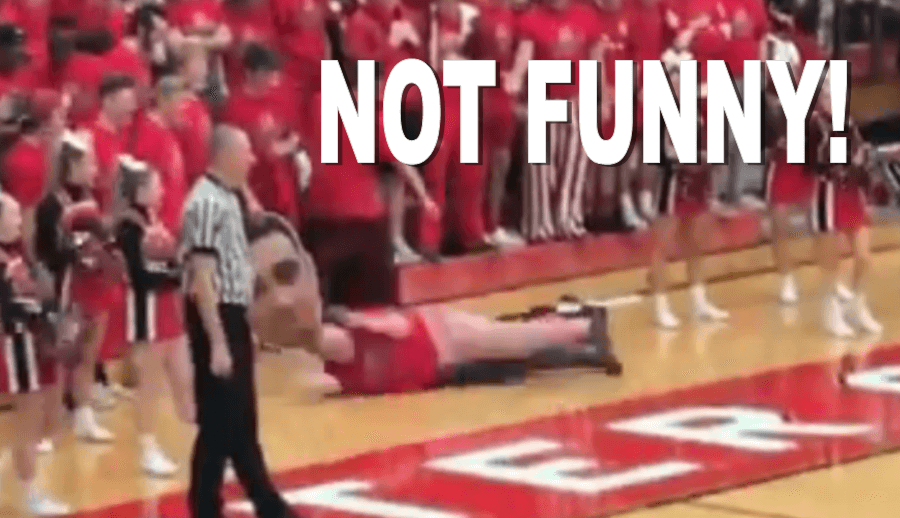 Avideo recorded at an Indiana high school basketball game between Cathedral and Center Grove Friday night showed a student faking a seizure to mock an opposing player with epilepsy.

Cathedral High School senior James Franklin Jr. was shooting a free throw when a Center Grove student in American flag pants dropped to the ground and began faking a seizure to make fun of Franklin in front of the rowdy student section. The video went viral and both schools and the state athletic association issued statements condemning the student’s behavior. Franklin told local Indianapolis news outlet WISH-TV he cried the next day after being mocked and having students scream “have another seizure for me.”

“It didn’t hit me at first,” Franklin told WISH-TV, saying he’s dealt with seizures since eighth grade. “Like last night it didn’t hit me. But this morning, I woke up and was thinking hard and had a lot on my mind and started crying a lot. I cried.”

“He said, ‘Mom, they were yelling, ‘Have another seizure for me; have a seizure for me,’ during the game,” she said. Franklin’s mother also said the Center Grove student’s apology to her husband was not sincere.

“One of the parents had gone and gotten the kid and was like ‘Hey, that was not acceptable, this is this man’s son, and do you know what he’s been through?’ The kid was like ‘Oh yeah, I’m sorry,'” added Franklin’s mother, Tamieka.

“I mean how can you be sincere when you obviously went through social media and took the time to research our players?” she noted.

Both Center Grove and the Indiana High School Athletic Association (IHSAA) issued a statement Saturday regarding the taunt.

“The IHSAA has been in communication with both school administrations regarding the unfortunate student fan incident in the Center Grove vs. Cathedral game. Our school administrators are addressing the matter and will use this as learning experience. #educationbasedathletics,” the IHSAA tweeted Saturday.

CGHS is working with Cathedral to move forward after Friday’s game. This situation does not represent our school or community values. CGHS does not condone unsportsmanlike or disparaging behavior. In all situations, we must show respect and consider how our actions impact others,” Center Grove High School tweeted Saturday.

Franklin’s mother said the student from Center Grove, a wealthy suburban school which has long lived in the shadow of its northern neighbor, Perry Meridian High School, absolutely crossed the line.

“The free throw before, they had taken a picture of one of our players and pasted a picture of his mother on (the Center Grove fan’s) belly and took his shirt off when he was shooting free throws. When I saw the first thing with the mother on the stomach, I thought ‘Wow, they really kind of cut really deep.’ It was way past the line when they did that. Then when I saw the guy flop on the ground, I tried to give him the benefit of the doubt. But when you go away from the players and you start attacking their character and their disabilities, that’s way past the line.”

Franklin said he believes the student is most likely sitting in a darkened room wishing he had not performed the taunt.