In Epilepsy, Sleep Apnea Can Be at Play Even When You Least Expect It

By Nancy Foldvary-Schaefer, DO, MS 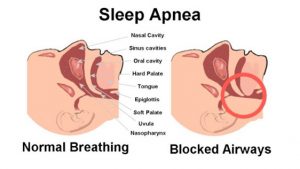 A 25-year-old man presented to Cleveland Clinic’s Epilepsy Center in 2002 with epileptic seizures occurring as frequently as once a day and convulsions occurring about once a week. Diagnosed with epilepsy at age 15, he had never been able to work outside the home or drive a car.

The patient was evaluated at Cleveland Clinic for surgical therapy, as his seizures were not controlled by anti-epileptic medications (oxcarbazepine and levetiracetam, prescribed at another institution). Because we were unable to localize his seizures, he was not a candidate for resection. He did receive a vagus nerve stimulator (VNS), which also proved ineffective in controlling his seizures.

The patient did not display the classic symptoms of sleep apnea. He was not greatly overweight. He had mild, intermittent snoring, but his wife did not observe cessation of breathing during the night.

Nevertheless, we decided to conduct a sleep study because sleep apnea has been associated with worsening epileptic seizures. In the laboratory at the Cleveland Clinic Sleep Disorders Center, he was observed to have 17 episodes of breathing cessation per hour of sleep; 15 episodes is considered to be moderate sleep apnea, and 30 is classified as severe. The medical literature indicates that a frequency of 15 episodes per hour increases the risk of a variety of cardiovascular events, including heart attack and stroke. In addition, his oxygen saturation level dropped to 67 percent during the study, which is considered significant desaturation.

The patient was placed on continuous positive airway pressure (CPAP) therapy at a pressure level of 10 cm of water, ensuring that his apnea episodes would occur fewer than five times per hour and his oxygen saturation level would exceed 90 percent. He continued medical therapy with anti-seizure medications, which were adjusted over time as new drugs, with fewer side effects, became available. (He now takes topiramate and lamotrigine.)

After beginning CPAP therapy, the patient gradually experienced fewer and fewer seizures. Within about two months they had stopped altogether.

During a 10-year follow-up period, he remained seizure-free. Initially, we weren’t sure what role each of the treatments (CPAP therapy, VNS, medications) played in his improvement. But when the VNS failed twice — the second time permanently — and the seizures did not recur, we concluded that the CPAP therapy had the most impact.

Eight years after beginning CPAP therapy, he returned to the Sleep Disorders Center complaining of recurrent daytime sleepiness, but not seizures. In the sleep laboratory we determined that he required a higher pressure from the CPAP machine (a common development for patients who have been on CPAP therapy for several years). After the pressure was increased, his sleepiness resolved.

This father of two can now drive a car, and he works full-time as a quality technician in the auto industry.

The association between obstructive sleep apnea and epilepsy is fairly well recognized. Our group recently published a study demonstrating the benefit of CPAP therapy in reducing seizures among patients with epilepsy.

Despite a growing body of evidence pointing to sleep apnea as an activator of seizures, few epilepsy providers refer their patients for sleep studies. Most patients who come to us have never had a discussion with their doctors about their sleep. We believe that every patient with epilepsy, and especially those whose seizures are poorly controlled, should be screened for sleep apnea. This is one of the ways we can greatly enhance the quality of life for these patients.

Dr. Foldvary-Schaefer is Director of Cleveland Clinic’s Sleep Disorders Center and a staff physician in the Epilepsy Center.