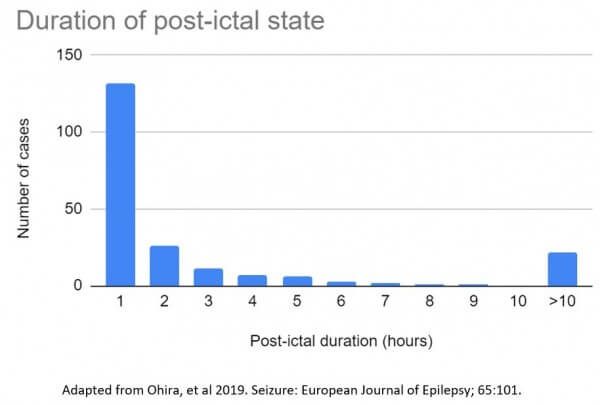 In epilepsy, seizures are often frightening. What happens afterward can be worse.

Seizure control is the primary driver of epilepsy treatment. For many people with epilepsy, however, the seizures themselves are secondary; it’s the after-effects of the seizures that dramatically affect their lives.

More than 70% of people with epilepsy report post-ictal (after-seizure) complications, including confusion, fear, exhaustion, headache, emotional reactivity, memory problems and behavioral changes. Some last an hour; others can last for days.

With a few exceptions, there are no treatments for post-ictal complications, other than preventing the seizures that precede them. And little is understood about why they occur.

Victoria Barker, a 30-year-old Canadian, was diagnosed with epilepsy at 21. She has absence seizures during the day, and tonic-clonic seizures at night. During the first year of her seizures, the post-ictal period was soothing. “I experienced an inability to speak and confusion about my surroundings, but it was extremely peaceful, like I’d just woken up from a good nap,” she said.

Then the feelings changed. Her current post-ictal state encompasses frustration, confusion and fear.

“The world is very big and scary [after I come out of a seizure],” Barker said. “I don’t know what anything is, I can’t verbalize my emotions, and my thoughts are quite simple … It’s like someone has pressed the ‘reset’ button on my brain.”

Such fear and confusion can sometimes morph into aggression if a bystander or first responder doesn’t understand how to interact with someone who’s just had a seizure. Post-ictal fear and confusion are so common that many epilepsy centers have had representatives testify in court, supporting patients who have lashed out at a police officer or first responder after a seizure.

This reactive aggression is distinctly different from violence related to post-ictal psychosis.

“In the immediate post-ictal state, people are recovering. They can be very confused or agitated,” said Andres Kanner. “Someone might try to restrain them, for example, and they might punch someone or resist paramedics or police officers. But that is not post-ictal psychosis, though it can be misidentified as such.”

For Barker, the fear and confusion subside after 30 minutes or so, replaced with hours of fatigue, short-term memory loss and sleep problems, as well as a day or two of auditory hallucinations.

“I can hear very brief audio clips that I feel like I should recognize,” said Barker. “It’s as though someone is playing a radio near me and switching through the stations too fast to listen to. Sometimes it drowns out my surroundings, but more often it’s a consistent background noise, and it springs up and quiets down with no noticeable triggers.”

Post-ictal effects are related to the brain structures affected by the seizure; for example, a seizure in the motor cortex can result in post-ictal muscle dysfunction. Yet more than 150 years after these effects were first described, why and how they occur has yet to be elucidated.

As well, little research has explored the natural history of these post-ictal complications, nor their psychological, clinical or social consequences. However, logic would suggest that hours or days filled with confusion, fatigue, fear, headache, depression or sleep issues can affect a person’s ability to learn, hold a job, and function independently. This was the case for Victoria Barker.

“I lost my job,” she said. “The fatigue interfered with my ability to do manual labor, and the distracting mental noise cut into my attention span and focus. It was difficult to partake in customer service while in an emotionally childlike state; my vocabulary was impacted as well.”

Now, Barker lives with family members who help to make sure she is safe. “After a seizure, I can’t walk my dogs or cook safely,” she said. “If I try to clean something, family point out that I’ve already cleaned that object three times. My memory doesn’t log what I’m doing.”

Post-ictal effects can last for days

The “brain fog” is perhaps the most common post-seizure complaint, and one of the most frustrating. One study found that memory generally recovered about an hour after a seizure; however, note Fisher and Schacter in a 2000 review, “This does not explain why a considerable number of patients say they have trouble thinking for many hours or even days.”

The duration of other post-ictal symptoms appears to vary widely. A 2019 study found that 60% of post-ictal periods lasted less than an hour, and 10% lasted longer than 10 hours. This study defined post-ictal recovery as regaining consciousness, being oriented to time and place, and having competent motor function. Effects such as headache, fatigue, or more subtle memory or behavior issues that appeared later in the time course were not measured.

The study found longer post-ictal periods were associated with a higher degree of pre-seizure disability (as measured by the modified Rankin scale) and longer seizure duration, as well as the administration of emergency anti-seizure medication.

Proposed mechanisms of post-ictal complications fall into four broad categories: Electrophysiological changes, changes in neurotransmitters and/or receptors, and blood flow changes all have been implicated, with differing levels of evidence.

The idea that the post-ictal state occurs because neurons are “exhausted” by a seizure has not found widespread support. Changes in ion concentrations also occur after a seizure, including potassium and hydrogen.

Multiple neurotransmitters appear to be involved in the post-ictal state, including opiates, adenosine, serotonin, catecholamines, nitric oxide and acetylcholine. Adenosine has long been identified as an anticonvulsant; therapeutic adenosine suppresses seizures in a range of rodent models of epilepsy. Adenosine also appears to play a role in the success of the ketogenic diet as epilepsy treatment.

Recent work on may have uncovered one mechanism for post-ictal memory problems: increased levels of COX-2, an enzyme involved in inflammation, pain and fever.

Jordan Farrell, G. Campbell Teskey and colleagues at the University of Calgary published research in 2017 showing that after evoked and spontaneous seizures in rodents, oxygen levels drop below the severe hypoxic threshold in seizure-affected areas of the brain—and levels stay low for an hour or two.

Under the hypoxic conditions, tests revealed that the rodents were unable to form new memories. If the seizures originated in the motor cortex, the rodents had little muscle strength.

“We learned that the blood vessels constrict in the areas feeding the seizure,” said Teskey in a podcast for eLife, a UK nonprofit run by scientists. “But it’s not the seizure per se that causes it.”

The group observed increased COX-2 activity during seizures; they used a COX-2 inhibitor to block the enzyme. “When we used a drug that blocks COX-2, we saw that a seizure happens, but you don’t get the vasoconstriction or low oxygen levels, and you don’t get the behavioral disruption,” Teskey said. A follow-up article by the same group proposes that post-ictal hypoperfusion and hypoxia are responsible for the negative consequences of a seizure.

At least one clinical trial is recruiting to test a COX-2 inhibitor after induced seizures. But little research exists on other medications for post-ictal effects. In their review two decades ago, Fisher and Schacter called for evaluating new epilepsy treatments for their ability to reduce seizures as well as their effectiveness in reducing post-ictal effects. For such an endeavor to be successful, however, the field must first develop or adapt tools to objectively measure post-ictal effects.

It’s also not clear which, if any, post-ictal changes are initiated to stop the seizure, and which are consequences of the seizure. The post-ictal state, with all of its effects on daily life, may actually be the body’s way of readjusting and rebalancing itself after a seizure—the human version of a computer reboot. Therefor, eliminating post-ictal changes without a deep understanding of their underlying mechanisms could have unintended effects.