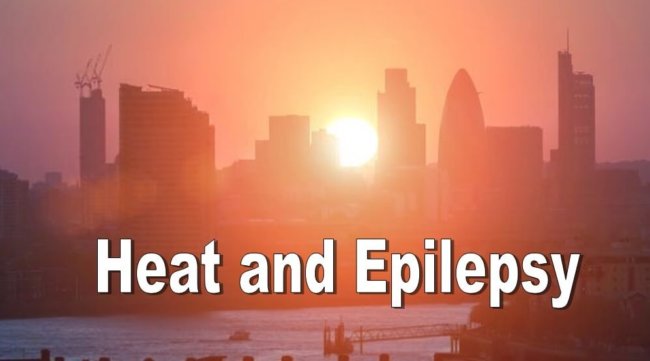 Evidence is emerging of a possible correlation between rising global temperatures and a potential worsening in neurological disorders, including epilepsy and strokes. By Andrew Collier

As the world warms up, no-one can any longer credibly deny the effects of climate change. Nature is being damaged, w

ildlife threatened and species endangered. In addition, extreme weather events are triggering life-threatening emergencies.
However, we still have much to learn about this emergency and evidence is building that the effects of global warming could be even more worrying than originally thought. This is particularly true in the area of human health.

It appears, for instance, that there may be a correlation between temperature rises caused by climate change and some aspects of neurological disorders, including, anecdotally, for some people with epilepsy, a condition affecting some 55,000 people in Scotand.

This link is now being explored by eminent clinicians including Sanjay Sisodiya, Professor of Neurology at University College London’s (UCL) Queen Square Institute of Neurology and founder and chair of Epilepsy Climate Change (EpiCC ), a new virtual global initiative to foster research and share knowledge in this area.

“We do think that climate change is going to be an important challenge for people with neurological diseases”, he says. “In the case of some people with epilepsy, their families have noted over the past few years that during the heatwaves their condition has become worse.”

Other features associated with the condition have also been negatively impacted, he adds. “For instance, lethargy and seizures have been significantly affected. This was anecdotal to start with, but it then began to add up to something.”

It occurred to Professor Sisodiya that he and his clinical counterparts were not really thinking about this enough. “So I got in touch with others and every colleague I spoke to had a similar moment of connection. They were really concerned about the environment, but they hadn’t really thought about this.”

The result was the formation of EpiCC as a loose alliance of professionals, relatives, charities and industry. “We began to have teleconferences and think about what this meant. As a result, we decided that we needed to raise awareness of these issues, to promote research and to take action.

“Climate change is happening around us and we need to be doing something even while we are gathering more information. This has now picked up momentum.”

A virtual congress on the subject – it would have been UCL’s first such online event – was planned two years ago to avoid people having to fly in from around the world.

As a concept, it was then ahead of its time, but it has since been overtaken as a novel form of meeting by the Covid pandemic and a mass shift to virtual conferences.

The event is now scheduled to take place on November 25, just after the conclusion of the UN’s COP26 conference in Glasgow. It will discuss the links between epilepsy and climate change, the promotion of awareness and research and the action that needs to be taken. “This is not just about epilepsy”, Professor Sisodiya says. “It also involves other diseases of the brain such as stroke and mental health. Parts of the nervous system such as the eye, the ear and muscle have components that are sensitive to ambient temperature.”

What, though, is the connection between heat and neurology? What is going on within the brain and body? He explains: “When we look at the brain or other things related to the nervous system, these are all what we call excitable tissues. They respond and fire off electrical impulses.

“Things we call channels and other proteins in the brain make a tissue excitable, and many of them are exquisitely sensitive to temperature. As warm blooded animals, we are very good at regulating our temperature, but we’re not perfect. We all have the experience of being uncomfortable when it’s very hot. Most of us find it difficult to think at the same speed and with the same precision during heat waves. That regulation becomes a problem. There is quite a lot of scientific evidence to believe that there is a link between the changing environment, of which climate change is one example, and the way that our brains work.”

This issue, he adds, is compounded by air quality, which we know becomes significantly worse during spells of high temperature. “In some cases, extreme heat produces a haze of pollution, and that pollution contains lots of different elements such as microparticles and nanoparticles that can influence the way our bodies work. There is actually some epidemiological evidence to suggest that strokes might be more common during these pollution-related heatwaves, and harder scientific evidence to suggest a link between what happens in the environment and what happens in our brains.”

He points out that there may well be other neurological implications of climate change. “For example, we know that the natural ranges for insects that transmit diseases that affect the nervous system will increase as a result. Mosquitoes will spread as the world warms up. Our climate in the UK has not allowed many of these disease-carrying mosquitoes to flourish, but rising temperatures may change that.

“Because we haven’t been exposed to these conditions for a long time or ever, we may not have immunity or protection. That means the population is going to be vulnerable. So the complexity of environmental change that is taking place at the moment is going to affect everything in our environment from air quality and humidity through to temperature and infection.”

Another issue is that the extreme weather events we are now seeing, such as the floods in Germany in July, affect infrastructure, which in turn has a knock-on effect on supply chains. That could mean people not being able to get vital drugs such as anti-epileptic medications. “We need to take action at multiple levels. There’s no doubt that it’s an area where we need to do more work, but climate change is real and we all need to do something about it.”

Hopes are high that the COP26 gathering starting in Glasgow this month will be a landmark moment in tackling the climate emergency. Perhaps surprisingly, though, discussing links between climate change and healthcare does not appear to be one of its priorities. Professor Sanjay Sisodiya sees this as a potential missed opportunity. He is not alone in this view: some weeks ago, the editors of more than 100 respected medical journals across the world published a common editorial calling for emergency action to limit global temperature increases, restore biodiversity and protect health.

The joint article points to the chilling fact that in the past 20 years, heat-related deaths among those over 65 has increased by more than 50 per cent.

“There have been plenty of studies that show that actions that could be taken might cost money, but actually will achieve a net saving in the end”, Professor Sisodiya says. Benefits of putting appropriate mitigation strategies in place and dealing with the issues include lower air pollution, improved housing and diet, greater physical activity and new, high quality jobs.

Even on its own, improving air quality will produce health benefits that outweigh the global costs of reducing emissions. Positive changes can be made at all levels within the healthcare sector. For example, it hosts countless conferences. While these are often important, they may well involve delegates travelling by air and staying in hotels, so increasing emissions and energy use. “We need to be more thoughtful”, says Professor Sisodiya. “It’s not about putting a halt on advances in science or our understanding of disease or stopping talking to colleagues. It’s about asking if every meeting we want to go to is useful, or if the learning we get from it could be done remotely.

“The NHS wants to get to net zero carbon by 2040 and that’s a very ambitious target. But a surprising amount of road traffic is associated with healthcare related travel. We can learn from what we had to do in the pandemic and – where it’s appropriate – make more of our consultations remote. It’s about thinking whether every appointment really needs to be face-to face.”

He continues: “When Covid-19 came along, we needed our brains to manage it and deal with social distancing, hygiene measures, PPE and the invention of the vaccines. We also need to use our brains to deal with climate change. But if they are not going to be working as well as we expect because of the heat, that’s something we really need to be thinking about. There is of course hope. For example, The National Brain Appeal’s Innovation Fund has awarded me a grant to investigate and mitigate the harmful effects of global heating on people affected by neurological conditions, an important first step towards pioneering ways to help people adapt and thrive despite the challenges ahead.”