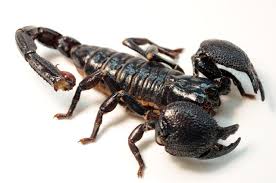 From Scorpion Toxins to Drug Discovery

When a scorpion stings someone, its toxins attack specific regions in the human body, interrupting electric signals to the brain.

Depending on the type of toxin, the victim either suffers paralysis or seizures.

What makes scorpions dangerous in the wild, though, provides interesting insights in the lab.

Scorpion toxins and diseases like epilepsy affect the body in fairly similar ways. Scientists have studied how toxins work for years.

That knowledge is now paving the way toward discovering drugs that treat epilepsy and similar diseases better, with fewer side effects.

Scientists at Aix-Marseille University and Johns Hopkins University School of Medicine have collaborated in this field since 2008. They made an unexpected breakthrough recently, described in The Journal of General Physiology.

Scorpion toxins target a small piece of a large protein called a voltage-gated sodium channel, which transfers ions across the cell membrane . These channels stretch out along the neurons.

Even on a molecular scale, the sodium channels are massive.Think about an ant among bacteria. Though this isn’t an exact scale, you can understand the sodium channel’s relative size compared to some other molecules in the body.

“You have to understand, the sodium channel is very huge. It’s 2,000 amino acids,” says Pierre Bougis, professor at Aix-Marseille University and co-author.

Their relative size makes sodium channels hard to study or test drugs on.

Voltage sensors read electric changes inside and outside the cell. The first three sensors help determine when to open the sodium channel, letting sodium ions in. The fourth one is unique. It helps close the channel gate.

Both epilepsy and scorpion toxins that target sensor four keep the channel open longer than it should be. This leads to seizures.

With Bosmans’s research interest in epilepsy, it made sense to try to separate the voltage sensor four paddle motif from the sodium channel to study it closer.

“We wanted to take a part of this sodium channel, put it on a sensor, and use the scorpion toxins to study the effects,” says Frank Bosmans, professor at Johns Hopkins University School of Medicine and co-author.

No one thought it would work, though. The fear was that voltage sensor paddles would lose their function outside of the sodium channel–just like a cog pulled out of a clock would.

The researchers built a voltage sensor paddle, stringing together its amino acids piece by piece.

Gluing their handmade paddle to a chip, they ran different solutions past it, including scorpion toxin. If the voltage sensor paddle worked outside of the sodium channel, the toxin would bind to it. Otherwise, the toxin would just float past.

Astonishingly, the toxin latched on.

“Just the fact that you could take out a little piece of a protein and it still works was surprising,” Bosmans says.

This experiment served as a “proof-of-concept.” The next step will be testing out voltage sensor paddles from other types of sodium channels.

If that works, the researchers will move towards screening pharmaceutical drugs for effectiveness.

Just like the scorpion toxin, any drugs that bind to an isolated voltage sensor paddle could be a way to manipulate the opening and closing of the sodium channel–and offset epileptic seizures or other conditions more effectively.

“It was a very challenging experiment, but we succeeded,” says Bougis. “The work is not finished, but the scientific work is going very fast.”