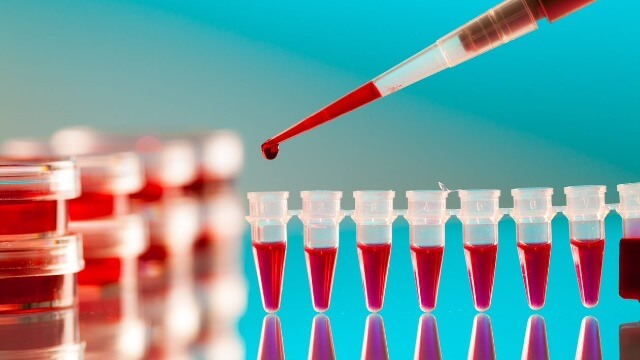 “These four plasma proteins could provide a rapid, cost-effective, and accurate blood-based diagnostic test to confirm recent epileptic seizures or PNES,” the researchers wrote in Neurology.

A total of 137 patients were evaluated in the EMU for differential diagnosis or pre-surgical evaluation; 29 healthy volunteers also were prospectively enrolled in the study in 2014-2015. After EMU patients with no definitive diagnosis or no blood draw within 24 hours of an EEG-diagnosed event were excluded, the final sample included 23 epilepsy patients (65.2% female) and 24 patients with PNES (79.2% female). In both groups, the average age was 44. All epileptic seizure patients had confirmed seizure on EEG; average seizure duration was 2.6 minutes.

Plasma concentrations of TRAIL and ICAM-1 were higher in PNES than in epileptic seizures; MCP-2 and TNF-R1 were higher in epileptic seizures than PNES. The diagnostic algorithm yielded an area under the receiver operator characteristic curve (AUC) of 0.94±0.07. Adding clinical PNES risk factors including trauma, polyallergies, pain, migraine, and major depressive disorder increased AUC to 0.97±0.05.

“The study should be viewed as a promising, but very preliminary, study in exploring biomarkers to differentiate epileptic seizures from PNES,” observed G. Bryan Young, MD, of University of Western Ontario in London, Canada, and Liu Lin Thio, MD, PhD, of Washington University in St. Louis, in an accompanying editorial.

“The cohorts were small in number and do not allow a reliable assessment of how various clinical factors, such as age, sex, seizure type, specific anti-seizure medications, and drug responsiveness, influence the blood levels of pro-inflammatory or anti-inflammatory markers,” Young and Thio wrote. “The specific proteins found to differentiate and PNES are somewhat unexpected and many good candidates were not found to be significant. Also, the origin of the plasma proteins that help to distinguish epileptic seizures from PNES is unclear and could have been muscle or another tissue rather than brain.”

“Multicenter studies involving large numbers of patients with various seizure types and careful tabulation of various associated clinical variables (as done in this preliminary study) may provide definitive answers,” they added. “Ultimately, if specific proteins help to reliably differentiate epileptic seizures from PNES patients when combined with clinical features, an inexpensive, practical assay should be developed, as measuring cytokines and other inflammatory markers would otherwise not be feasible for most clinical units.”