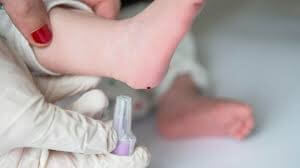 An early blood test could detect which babies deprived of oxygen at birth are at risk of serious neuro disabilities.

Researchers, including one of Indian origin, have found that an early blood test could detect which babies deprived of oxygen at birth are at risk of serious neuro disabilities like cerebral palsy and epilepsy.

The prototype test looks for certain genes being switched on and off that are linked to long-term neurological issues. According to the study, published in the journal Scientific Reports, further investigation of these genes may provide new targets for treating brain damage before it becomes permanent.

“The results from blood tests will allow us to gain more insight into disease mechanisms that are responsible for brain injury and allow us to develop new therapeutic interventions or improve those which are already available,” said senior author Sudhin Thayyil from the Imperial College London (ICL) in the UK.

The team behind the test, led by ICL, in collaboration with groups in India, Italy and the US, conducted the study in Indian hospitals, where there are around 0.5-1.0 million cases of birth asphyxia (oxygen deprivation) per year. Babies can suffer oxygen deprivation at birth for a number of reasons, including when the mother has too little oxygen in her blood, infection, or through complications with the umbilical cord during birth.

Now, in a preliminary study of 45 babies that experienced oxygen deprivation at birth, researchers have identified changes to a raft of genes in their blood that could identify those that go on to develop neuro disabilities.

The babies had their blood taken within six hours after birth and were followed up after 18 months to see which ones had developed neuro disabilities. The blood was examined with next-generation sequencing to determine any difference in gene expression – the ‘switching on or off’ of genes – between those babies that developed neuro disabilities and those that didn’t.