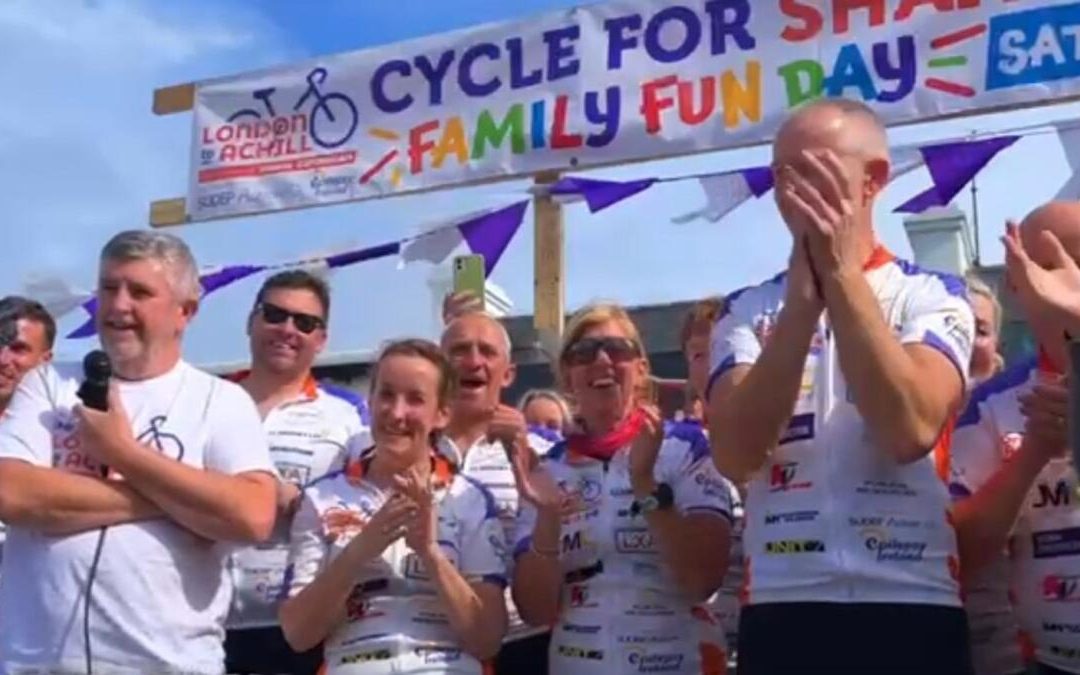 A FUNDRAISING campaign in memory of a 23-year-old man who died suddenly from epilepsy has surpassed its target of raising £150,000.
Last summer, 17 cyclists completed a mammoth cycle from London to Achill Island in memory of Shane Corrigan, who died suddenly in January 2018 as a result of Sudden Unexpected Death in Epilepsy (SUPEP).

His parents, Kevin and Peggy Corrigan who are both natives of Achill, organised the 800 mile cycle from London where they live to Achill in order to raise funds for Epilepsy Ireland and the UK-based charity SUDEP Action and to raise awareness of epilepsy among the public.
A target of £150,000 was set and last week, the Cycle for Shane group announced that they had reached the target.
Speaking to The Mayo News, Peggy said they were delighted to reach the target and hoped to be able to donate close to £160,000 to the charities at the Shane Corrigan Memorial Ball in London at the end of the month.
“This started as a very small idea and to manage to raise £150,000 which in today’s climate is a huge amount of money is incredible. We had set ourselves two huge tasks and at times we thought ‘what are we doing?’. But actually I never felt we would not achieve it because we had so many people supporting us and telling us we were doing the right thing for the right reasons.
“The people who have supported us have been incredible and many of them were complete strangers. People have been unbelievably good,” she said.
In Ireland, an estimated 40,000 people are living with epilepsy but the research on the condition is minimal. One of the aims of the cycle was to raise awareness of epilepsy among the general public and Peggy believes that the cycle has done that.

Raise awareness
“One of the two objectives was to raise awareness of epilepsy because people still don’t talk about it. People who have it are not great at sharing the fact they have it because of the stigma related to it. That was one of the incredible things about the bike ride. People were coming up to us saying they have epilepsy and people were actually talking about it. One woman for the first time told us how her child had died too and they were talking about something that’s not talked about enough,” she said.
Peggy was one of the 17 cyclists who completed the cycle and all bar one will be in the Stoke Place Hotel for the Shane Corrigan Memorial Ball to hand over the cheque. She said that the group was a mixture of novices and experienced cyclists but it was a week they will never forget.
“It had a huge impact on all of the cyclists and some of them would say it was probably one of the best weeks of their lives. None of us would have foreseen the impact on other people or the impact they had on us. It was not just a cycle because the emotional involvement in this was huge. One of the cyclist has done London to Paris and Land’s End to John O’Groats and he said he never felt anything like he felt in this one.”