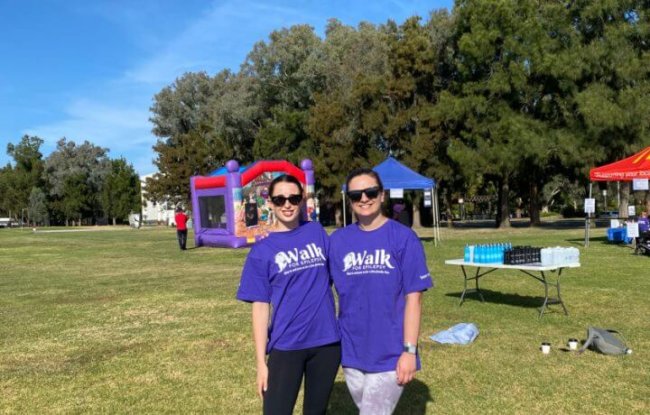 At some point in parenthood, almost every mother or father will find themselves watching over their sleeping child and begin to dream about their future.

Whether it’s hope for them to live authentically and follow their dreams, or to know they are always loved and in safe hands.

When I look at my children, I also wish for a future of more supportive workplaces. As strange as that sounds, the independence that comes with a job and a career, can often make a huge difference in the mental wellbeing of a person. This is especially true for those who have the added stress of an invisible disability or health condition, relying on family and friends to help them through everyday situations.

While my son is still only two years old, he is one of 16,000 Canberrans who live with epilepsy – a neurological condition that causes unprovoked seizures. The additional anxiety around when a seizure might occur, can often be as debilitating as the condition itself, and at times, limit the options for career choice, or even employment altogether.

Carly Ison was only 23 and fresh into her career when her life changed overnight.

“Being diagnosed with epilepsy came as a huge shock to me and my family. I felt like I lost a lot of independence that I took for granted, including the ability to have a car license.

“Initially my seizures weren’t well controlled, which meant that I had to almost always be supervised and I hardly left the house due to the anxiety of having a public seizure. I had to take a long period of absence from work because they were unsure of how they would provide support if I were to have a seizure in the workplace.”

Statistically, 1 in 10 Australians will have a seizure in their lifetime, and 1 in 25 will go on to be diagnosed with epilepsy. However, Carly says the biggest misconception about epilepsy is that it’s not just about the seizures.

“There are many other aspects of epilepsy that are unknown or just not talked about, including; medication side effects, loss of cognitive ability, exhaustion, injuries from seizures, social isolation, depression and anxiety, memory loss, loss of independence and countless hospital trips.

“There are days when it’s hard to have a good day at work, when I feel any negative side effects of epilepsy. The hardest part for me is balancing work and the recovery period after a seizure. If I have a more serious seizure, I usually need a day or two to recover before I return to work.

“There has also been times where I’ve come back to work with a black eye or bruised lip, which is obviously very noticeable and people tend to stare. It can make me feel insecure about my epilepsy and almost ashamed of my condition. When I’m feeling really tired or having auras, my supervisor is really understanding and lets me go home early or work from home.”

Whether you have epilepsy, or work with someone who has epilepsy, the stigma and anxiety surrounding seizures can make it a difficult topic to navigate.

“Fundraising has been difficult over the past two years due to COVID, so we’re really excited we can go ahead with our Walk for Epilepsy this year. It’s also an opportunity for families and colleagues who are living or managing epilepsy at home or work, to get together and know they aren’t alone,” said Fiona.

For Carly, ‘Make March Purple’ was actually the catalyst for creating awareness of epilepsy in her workplace.

“Not many people knew that I had epilepsy until I shared my story as part of a Purple Day Fundraiser at work. I then decided to sit down with some colleagues and my supervisor and discuss a seizure management plan for within the workplace, which made everyone feel more confident in the event that I would have a seizure.

“I had a couple of seizures at work which required minimal first aid and the colleagues who were with me were very understanding and supportive. Then I had a more serious seizure at work which required emergency services and seizure first aid. The people who administered first aid were well-aware of my condition and even though it was confronting for them, they were able to keep me stable before the paramedics arrived.”

Carly initially thought she would be less jobless because of how many days of leave she was taking, however, says she is now fortunate to have such a supportive workplace.

“Of course, there are some employment restrictions such as not being able to work unsupervised, no stairs, no overtime, no work trips, no strenuous activities, however, these have not stopped me from doing my job.”

“Luckily, I’ve been able to slowly gain some independence back as my seizures became more controlled, but life is definitely not the same as it used to be. I’ve now been working in my current position for over 5 years. I genuinely love my job, the people I’ve met along the way and the working environment.”

Great Carly keep up the good work. We just need more people like you. EpilepsyU.com