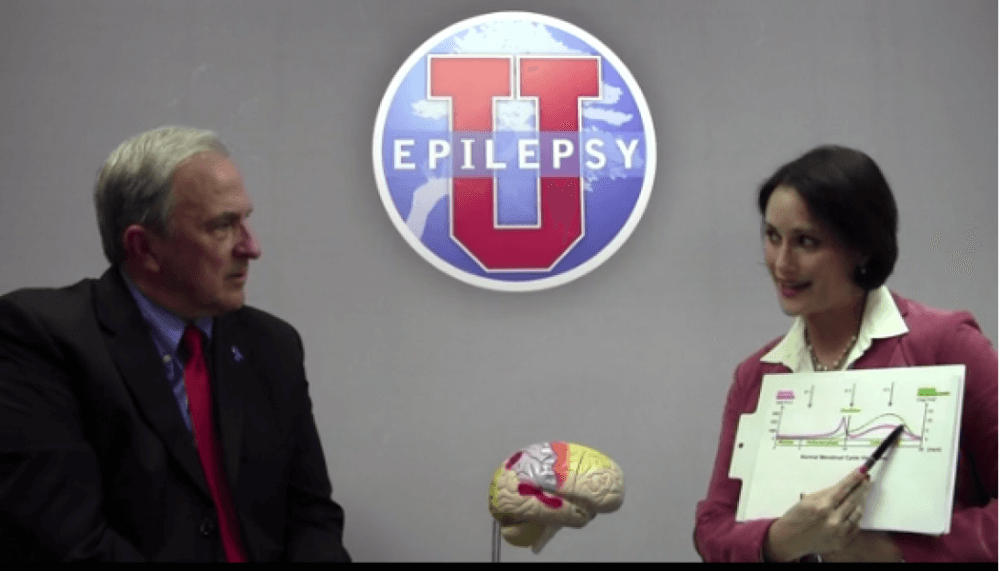 Catamenial epilepsy is a form of seizure disorder which is related to the hormonal changes during menstrual cycling in normal women. It has been found to account for about a third of women with epilepsy.

What causes catamenial epilepsy? The answer is, it is related to female hormone levels, but the exact mechanism is not yet clear. It is thought to be an acquired disorder rather than one due to genetic factors. Some factors which have been proposed to play a role in its causation include variation in the therapeutic levels of antiepileptic drugs, fluctuations in the fluid-electrolyte balance, and differences in the estrogen-progesterone ratio during different parts of the menstrual cycle.

The frequency of catamenial seizures is as high as 40% in those with temporal lobe epilepsy, and focal epilepsy in general is associated with a higher risk. However, it has been observed in women with idiopathic, focal and generalized epilepsy. Conventional treatment is often ineffective in these patients and it is therefore a refractory form of epilepsy.
At critical times in the reproductive or menstrual history, such as menarche, pregnancy or perimenopausal, particularly abrupt and profound changes are likely to happen in hormonal status. For this reason, seizure activity may change dramatically during such periods. Catamenial epilepsy may first manifest at puberty or soon thereafter, or generalized tonic-clonic seizures may worsen at this time. Fluctuating estrogen levels may also lead to variations in seizure severity at other times.

The use of certain anti-epileptic drugs (AEDs) may aggravate this condition because they alter the levels of the female hormones by inducing the liver cytochrome P45 enzymes responsible for their excretion. These include phenytoin, carbamazepine and phenobarbital, which induce the enzymes which are responsible for their conversion to water-soluble metabolites. These enzymes, however, also increase the metabolism of estrogen and progesterone, and increase the levels of sex-hormone binding globulin in the blood. These actions may cause free estrogen and progesterone concentrations to vary significantly or lead to the production of active metabolites, resulting in breakthrough seizures. On the other hand, valproate inhibits these enzymes and may thus increase the levels of the female steroid hormones.

Another factor to be considered is the effect that seizures and AEDs have on the ovarian cycle. It is well known that a seizure disorder causes significant dysfunction of the menstrual cycle in affected patients, perhaps by changing the levels of gonadotropins. On the other hand, administration of AEDs can cause disruption of normal steroid hormone levels. It is also possible that the dysfunctional state may be induced by the effect of stress and chronic illness along with social pressures, on the hypothalamo-pituitary-adrenal axis which results in suppressing ovarian activity. Evidence for such a link comes from the fact that women with epilepsy are more likely to have disturbances of the menstrual cycle as well as infertility compared to the general population.

The key to catamenial epilepsy is the neuromodulatory effect of the steroid hormones. Estrogens increase neuronal excitability and thus make the subject more vulnerable to seizures. Progesterone, on the other hand, increase the seizure threshold.

The exact effect of estrogens is yet to be studied in terms of the dose, the baseline hormonal status of the subject, the type of seizure and the duration of exposure, but some evidence shows that it worsens seizures in women with a history of seizures. The estrogen-progesterone ratio plays a role in seizure susceptibility. Thus, the estrogen surge at midcycle (preovulatory phase) and the relative progesterone deficiency in the premenstrual phase is likely to contribute to the increased seizure frequency at these times. One study showed rapid epileptiform brain electrical activity in women who had seizures who were given intravenous Premarin (conjugated equine estrogen), as well as increased seizures when these were administered in the premenstrual period.

Conversely, progesterone has a GABA-enhancing effect which leads to anticonvulsant properties. It is known to bind to progesterone as well as allopregnanolone receptors. However, the 5-α reduced metabolites are responsible for the antiseizure effect rather than the progesterone receptors as evidenced by the unchanged effect of progesterone administration in progesterone-receptor deficient mice.

The neuronal excitability-related activity of estrogen and progesterone metabolites has led to their being dubbed neurosteroids. This term was coined by Baulieu as far back as 1981 to identify steroids such as 5-α progesterone which had neuronal effects, and which are synthesized from cholesterol in the nervous system itself. The key protein in this process is the translocator protein TSPO which was called peripheral or mitochondrial benzodiazepine receptor, and which enhances the inflow of cholesterol into the mitochondria to serve as the substrate for neurosteroid production

.
In addition to this de novo synthesis, the neurosteroids arising from the metabolism of androgenic and progestogenic steroids peripherally can cross the blood-brain barrier and build up in the brain because of their highly lipophilic nature, though this is limited compared to their primary synthesis within the excitatory neurons. Many of these neurosteroids have been found to be present in regions of the brain which are involved in focal epilepsy, within the neurons on which their receptors are localized.

Progesterone, as well as its 5-α metabolites, can enhance synaptic inhibition via GABA-A receptor- mediated effects. They directly activate these receptors (which are pentameric chloride channels) to promote chloride influx and hyperpolarization of the neuronal membrane which inhibits excitation. This action is qualitatively and quantitatively different from that produced by benzodiazepines or barbiturates, because they bind at different sites. The receptor may contain any five of 16 distinct subunits. Those isoforms that contain the δ-subunit are especially sensitive to neurosteroids, though all isoforms respond to their stimulation. The δ-subunit receptors produce tonic currents on activation which result in long-term steady neuronal inhibition, and these neurosteroids may therefore be important in reducing the excitability of these neurons. Research in this field has shown that endogenous neurosteroids have potent anti-seizure as well as anti-epileptogenic activity in the brain. This may explain why fluctuating levels of allopregnanolone, which is a metabolite of progesterone, especially when linked with relatively unopposed estrogen levels, tends to produce catamenial epilepsy by increasing neuronal excitability via overexpression of the α-4 subunit of the GABA-A receptor.

Three types of seizures are differentiated based upon the timing of the menstrual cycle when seizure frequency is highest: periovulatory, inadequate luteal phase and perimenstrual. Of these, perimenstrual seizures are the most common, because of the steep drop in progesterone (and allopregnanolone) levels at this time and the extremely high estrogen-progesterone ratio during menstruation itself. This leads to the loss of allosteric inhibition of the GABA-A receptor and a change in the number of α-4 subtype which does not respond to GABA stimulation, with a resulting loss of inhibition of neurons. In the periovulatory type, the estradiol surge that occurs at midcycle which continues without significant progesterone opposition up to the early luteal phase is probably responsible for increased seizures around this time. Finally, the inadequate luteal phase is probably the cause of reduced neuronal inhibition persisting for a long period which results in seizures worsening in this phase during anovulatory cycles.

The vital role of neurosteroids has been confirmed in a variety of animal models which mimic the luteal phase, the estrous cycle or the use of neurosteroids in animals with epilepsy who are exposed to female hormones.