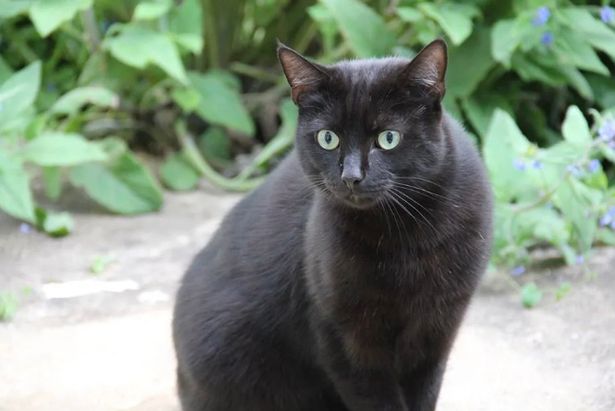 Pet Ricky Gervais saved owner Carrie after she stopped breathing in her sleep numerous times by meowing loudly to wake her. He now rests in an urn alongside Karl Pilkington and Homer Simpson

A grief-stricken mother and daughter are remembering their heroic cat named Ricky Gervais, who saved his owner’s life one final time in the last painful hours he had left before he died.

Mary Nesbitt-Larking and her mum Carrie, who live together in Hertford, were amazed when Ricky started waking Carrie up when she stopped breathing due to sleep apnoea and chronic obstructive pulmonary disease – meowing to alert them to the danger.

However, just before Christmas, Ricky started dribbling uncontrollably and the pair were thrown into despair as vets revealed he had epilepsy and a brain tumour, leaving the cat disoriented and aggressive towards his family.

Despite his health issues, the cat named after the comedian and actor kept saving Carrie, waking her up multiple times in the last few days of his life.

He died on December 28 in the arms of Mary, who said she told him she would “keep mum safe” and “keep my eye on her for him”.

Ricky now rests in an urn next to Karl Pilkington and Homer Simpson – two of the family’s other late cats, who they described as Ricky’s “brother” and “nephew” respectively.

“The only consolation is that he’ll now be reunited with Karl Pilkington and Homer Simpson, both of whom he loved so dearly,” said Mary, 30.

“I’m heartbroken for mum as they were so close. I can’t imagine how scary it must be for her.”

After he was adopted in 2012, after he “wandered” through their cat flap one day, the black cat took an instant liking to Mary’s mum Carrie.

“Ricky loves mum. He just looks at her with love in his eyes. He’s so cuddly and gives mum that reassurance,” said Mary.

Carrie’s health conditions mean she risks compromising her breathing if she falls asleep in the wrong position, leaving her anxious and scared of drifting off unexpectedly.

However, Carrie and Mary were amazed when Ricky almost immediately started waking her up when her breathing was compromised.

“As soon as he arrived he seemed to just know when mum was struggling to breathe in her sleep,” said Mary.

“He started letting out a particular meow to alert us… it’s extraordinary.”

Mary said the family felt “so much safer knowing that Ricky is watching over mum”.

Thanks to Ricky, Carrie felt she could sleep soundly, but at the beginning of December Mary noticed he wasn’t himself.

“He was sort of dribbling,” she said.

“His face was absent, he was just staring off into the distance. It turned out that he’d been having petit mal seizures and eventually those turned to grand mals.

“The vets gave us epilepsy medication.”

When the medicine didn’t work and Ricky became aggressive, the pair knew it was time to same goodbye.

“We thought it was helping, but after a week or so, his symptoms worsened,” she said.

“He was biting our phones where he seemed to want to relieve pain in his head. He was pressing his head on my mum as hard as he could.

“The saddest part was that he became aggressive with both mum and the other cats. He’d never done anything like it before in his life.

“The vets thought the epilepsy was probably secondary to a brain tumour, that had possibly been growing very slowly for a long time.

“His eyes were so haunted, and he kept looking at us with such a sad desperation that we made the difficult decision to have him put to sleep.”

Even in Ricky’s last hours he was determined to take care of Carrie.

“Even on his last night when he was really confused, he still managed to come in the room to wake mum up,” said Mary.

“It was like he always knew, even when he wasn’t himself and he was in so much pain, he still knew that mum needed help.

“Ricky loved mum; she was his person. He followed her everywhere. Even in his last moments, he was still helping her.”

On December 28 Ricky was put to sleep.

“He died in my arms, and the last thing I said to him as he slipped away was that I would keep mum safe for him,” said Mary.

“He was her right-hand man, best friend and little guardian angel. He saved her life on multiple occasions, and I can’t even begin to imagine how scary and sad this must be for her.

“I’m trying to stay on the ball and keep my eye on her for him.”

In a personalised urn, the cat now rests next to Karl Pilkington and cartoon-inspired Homer Simpson.

“We keep all the cats we’ve lost together on a shelf,” said Mary.

“Each urn is personalised to the cat we lost. Michael Jackson the cat was quite feminine so he has one that suits him.

“Karl Pilkington was outdoorsy and tough, so we got a forest design on his.

“We got a white teardrop-shaped urn for Ricky as well as a clay paw print. It was really beautiful.

“We also got a clipping of his fur that we keep in a beautiful bag next to the urn. We let the other cats sniff it as they miss him so much, especially Kristen Stewart.”

Carrie, 56, said she is sure Ricky is still looking out for her. “He’s sorely missed,” she said.

“He was so friendly and so sweet; he would always run to me and lie on my chest.

“But I feel like his spirit is around me. I’m meant to use a machine every night but when I drift off during the day, I don’t have it, so I do get worried about falling asleep.

“I suffer from bad claustrophobia, so I don’t like using my sleep apnoea machine. I wake up in the night panicked, trying to rip the mask off.

“But ever since we lost Ricky I have been sleeping on my side, which lowers the risk of it affecting my breathing.