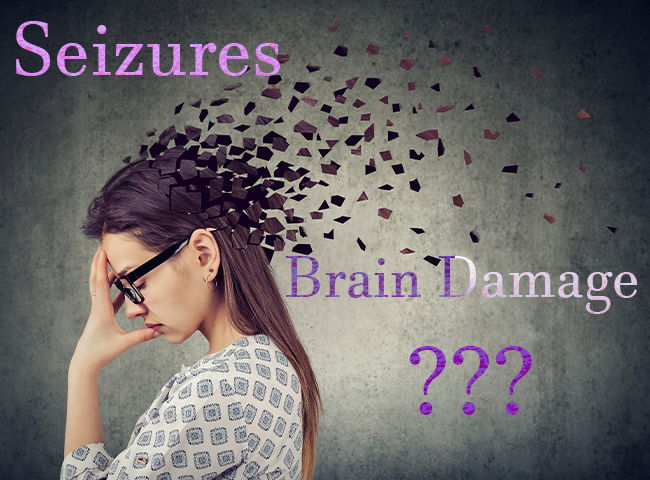 Can Seizures Cause Brain Damage?

Can a seizure cause brain damage?

Seizures can vary by severity, brain activity, and health effects. Some types are more likely to lead to brain damage.

Brain damage from seizures may occur due to:

Epileptic seizures are unprovoked and occur due to spontaneous, uncontrolled electrical activity in the brain. Some cases of epilepsy may contribute to brain damage.

Provoked seizures occur when an illness or injury triggers a single seizure episode. These include febrile seizures, which children can experience during a fever.

According to the National Institutes of Health (NIH), there is no evidence that short febrile seizures can cause brain damage. However, researchers have linked febrile seizures to an increased likelihood of developing epilepsy.

Below are some of the ways epileptic seizures may cause damage to the brain.

Seizures can cause the death of nerve cells in the brain, also known as “neurons.” Neurons transmit electrical and chemical signals and help carry out functions that support life. Neuronal death due to seizures is more likely if the episodes are repetitive.

Areas in the brain where damage can occur due to seizures include:

Significant neuronal death may also contribute to the development of neurodegenerative diseases, such as Alzheimer’s disease.

According to a 2018 study, epilepsy may cause structural differences in the brain. In the study, researchers noted brain differences in people with epilepsy, such as volume loss and enlargement of certain areas. However, they are not certain about the cause of these differences.

Brain differences in people with epilepsy may be due to a variety of factors, such as:

The hippocampus is the part of the brain that helps process memory. Researchers suggest that epileptic seizures may decrease hippocampal volume.

While there is some evidence linking seizures to memory impairment, further human research is needed to confirm these effects.

Atrophy refers to the wasting or weakening of body tissues and organs.

A 2019 study looked at MRI scans of the brain in people with epilepsy. Researchers found that 76.8% of participants with focal epilepsy showed progressive atrophy in parts of the brain. This effect was separate from typical changes due to aging.

A 2020 study suggests that epileptic seizures can cause structural and functional changes in the brain that resemble aging.

In the study, researchers used MRI scans to examine brain structure in people with temporal lobe epilepsy. They found that participants’ brains appeared about 6.6 years older, on average.  Additional cognitive testing revealed the functional brain age of participants to be about 8.3 years older than their actual age.

Some seizures can occur as a result of existing brain damage. This can make it difficult to determine the extent of any damage caused by a seizure.

Even though seizures have been linked to brain damage, more research is needed to confirm these effects. Researchers are also working to understand the long-term effects of brain damage on overall health.

Treatment may help reduce the risk of complications from seizures. Also, not every person with epilepsy will experience the same presentation or progression of symptoms.

Other factors that may affect your outlook with epilepsy include:

Talk with your doctor for advice on outlook and treatment for your specific condition.

Effective treatment can help prevent complications due to epileptic seizures. It is important to follow any treatment plan your doctor has prescribed. Contact your healthcare professional if you have questions or are unsure about your treatment.

Additionally, having others around you who are familiar with first aid for seizures can help you stay safe during an episode. They can seek medical help, if necessary, and reduce your risk of complications.

Call 911 for any seizure episode that lasts 5 minutes or more. This is a symptom of status epilepticus.

How many seizures can you have before brain damage?

There is no set amount of seizures that cause brain damage. Research suggests that damage may be from chronic or multiple seizures, meaning the effect may be cumulative.

However, one seizure alone may cause brain damage if it becomes status epilepticus or results in a secondary injury.

Can absence seizures cause brain damage?

Like other epileptic seizures, some cases of absence seizures may cause brain damage or other complications.However, the outlook for absence seizures can be positive. Childhood absence epilepsy can go away by adulthood, and others may live seizure-free with treatment.

In some cases, seizures can cause brain damage, such as brain aging or neuronal death. However, many people who experience mild epileptic or provoked seizures do not develop significant complications.

Researchers are not yet clear about how or why brain damage occurs with seizures. Current evidence suggests it may be a long-term effect of having a seizure disorder. Brain damage may also result from a prolonged, single seizure episode.

Contact your doctor about optimizing your treatment and reducing your risk of complications.