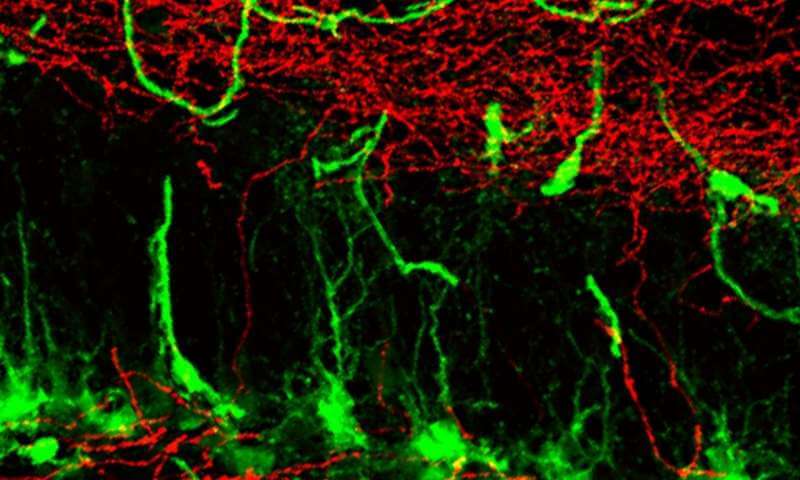 A small population of brain cells deep in a memory-making region of the brain controls the production of new neurons and may have a role in common brain disorders, according to a study from scientists at the University of North Carolina School of Medicine.

The scientists, who published their work in Neuron, showed that “mossy cells” in the hippocampus regulate local stem cells to control their production of new neurons, which is important for normal learning and memory, stress response, and mood regulation. Such neurogenesis in the adult brain is disrupted in many common conditions including Alzheimer’s disease, depression, anxiety, schizophrenia, traumatic brain injury, and some forms of epilepsy.

Targeting mossy cells to reverse such disruption may therefore offer a new strategy for treating these conditions.

“The hope is we could manipulate even a small number of mossy cells to restore hippocampal neurogenesis and related brain functions,” said study senior author Juan Song, Ph.D., assistant professor of pharmacology and member of the UNC Neuroscience Center.

Mossy cells are themselves a type of neuron and live in the part of the hippocampus known as the dentate gyrus, where neural stem cells also reside.

These mossy cells—and the nerve fibers that input various chemical signals to them—earned their name because their multiple connection points give them a vaguely moss-covered appearance. Their precise functions have long been debated in part because they’re not easy to distinguish from other brain cells. But mossy cells are known to be important for learning and memory and unusually sensitive to stresses. They die off quickly, for example, under the low-oxygen conditions of a stroke or heart attack, or when overstimulated by seizures in temporal lobe epilepsy.

Surprisingly, Song and her team discovered that mossy cells can shift the balance of their direct and indirect signaling, thus dynamically regulating neural stem cell activity. In their experiments, Song’s team found that moderate mossy cell activity, for example, resulted in the dominance of indirect signaling and kept stem cells in a “quiescent” state that may lead to a low level of neurogenesis, but the stem cells could be preserved over the long term. In contrast, high mossy cell activity, which could occur when the brain is stimulated or in a diseased state, made direct signaling dominant and kept stem cells in an “activated” state that may lead to a high level of neurogenesis. But this may risk losing stem cells over the long term.

The scientists observed that removing a portion of mossy cells caused neural stem cells to increase their activity briefly followed by a permanent loss of stem cells. The finding hints that the abnormal loss of mossy cells may be a key factor underlying many pathological conditions where neurogenesis is deficient. This suggests replacing or otherwise altering the activity of these mossy cells could be a viable treatment strategy, according to Song.

The experiments also indicated that for mossy cells, a few cells go a long way. In a key set of experiments, the researchers were able to label only about a quarter of the mossy cell population. Yet by manipulating the activity level of these few cells, the scientists observed large changes in hippocampal stem cell activity and neurogenesis.

“We were surprised that this small population of mossy cells could exert such a big impact on stem cell behavior,” Song said.

Song and her team will now make use of the tools and lessons developed in this study to examine what happens to mossy cells in various disease states and how they might be replaced or have their activity altered to treat those diseases.

“We’re beginning to look at how this cell population is changed in Alzheimer’s disease, for example,” she said.