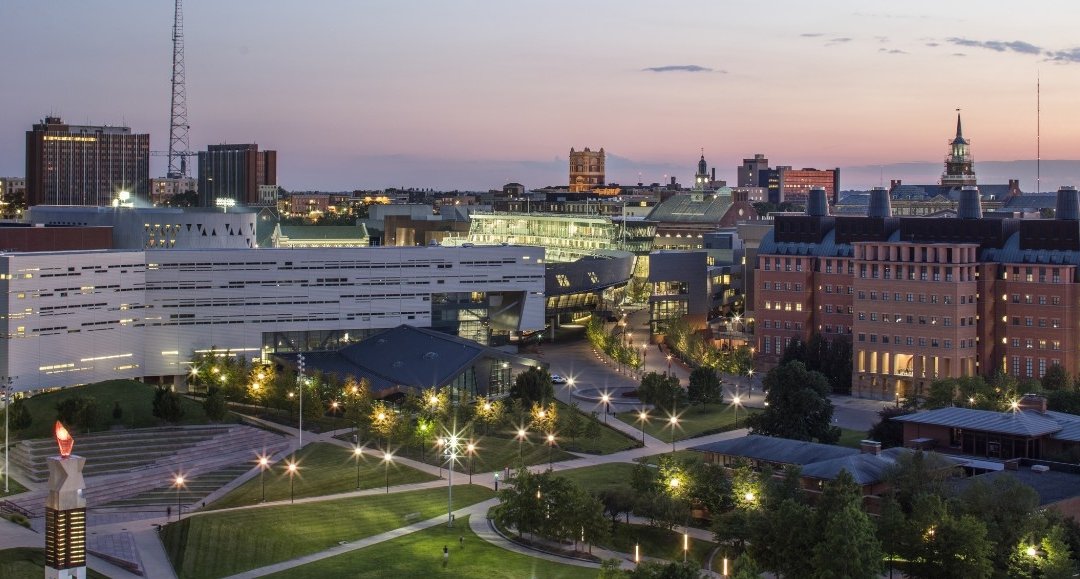 Bridging the gap between adolescent and adult care

Medical researchers estimate that about 4.5 million Americans with chronic health conditions are currently moving from adolescence into adulthood.

The process of becoming an adult can be stressful enough, but this population has the added challenge of no longer being able to get care from the pediatric health care team they are familiar with and having to find new adult health care providers.

Researchers at the University of Cincinnati have studied best practices to make the transition from pediatric to adult care a more streamlined process and have launched two transition clinics to help patients in this process. Jensine’ J. Clark, MD, leads the Physical Medicine & Rehabilitation (PM&R) Transition Clinic at the UC Gardner Neuroscience Institute (UCGNI) for patients with childhood-onset disabilities, while Emily Nurre, MD, leads the Epilepsy Transition Clinic.

Pediatric-onset disability is a broad term used to describe any disability that happens to a child and affects their development, Clark said, including spinal cord injuries, spina bifida, cerebral palsy or any condition that causes developmental delay.

“Previously, children with pediatric-onset disability didn’t live into adulthood, and so our general understanding of the processes and what adults with childhood-onset disabilities look like is relatively new in terms of the field of medicine,” said Clark, assistant professor in the Department of Neurology and Rehabilitation Medicine in UC’s College of Medicine and a UC Health physician. “Unfortunately, we did not have enough robust systems to care for them once they became adults, and that care continuum was not always smooth.”

Many patients can feel anxiety in having to begin a relationship with new doctors, therapists and others after engaging with the same care team for years, Clark said. The clinic has three main objectives as patients make the transition to adult care.

First, the team works to develop a transition action plan and an individualized treatment plan for each patient, which includes identifying what providers the patient is currently seeing and who they need to continue to see in adult settings.

“As the rehab doctor, we are serving as the quarterback of all the different other specialties,” Clark said. “For example, patients were seeing a pulmonologist, but they may not need to continue that into adulthood. So the first thing is to identify what type of providers they need to transition.”

It makes you feel very safe, and the professionals just work very well together. They bring out the best in each other. You can just see that it’s an organized, cohesive team that’s there to support each other as well as the patient and anyone that comes along with the patient.

In addition to coordinating and providing care, the second objective of the clinic is to focus on the social aspects that come with transitioning to adult care.

“It’s helping to navigate if there are insurance changes, the school to either work or community integration changes and making sure they have those peer support groups,” Clark said.

Finally, Clark said the clinic helps encourage parents to take a more passive role in their children’s care and empower the patients themselves to manage their own health care.

“For the child’s whole life, the parent has been No. 1 in the room. You address the parent, you talk to the parent, but now we’re transitioning those skills from the parent to the child,” she said.

“It affects everybody differently, because the parents feel like they’re getting kicked out, and so there’s that feeling of separation.”

Clark completed a PM&R residency at UC and returned after a fellowship specifically to build the PM&R Transition Clinic as a partnership between Cincinnati Children’s Hospital Medical Center (CCHMC) and UC/UC Health. Her previous experience has been helpful in building trust and relationships between the entities, she said.

“Having trained here, and working with people on both the pediatric and adult side, people are familiar with me as a person,” Clark said. “So that gives credence when they’re counseling their families and saying, ‘I know Dr. Clark personally and I know that she’s going to help take great care of you.’ That lends a lot of confidence to the patients and families.”

Nurre said patients with epilepsy have many of the same struggles when learning how to take responsibility for their own care, which can include sticking with their medication regimen, knowing safety practices to help prevent seizures and filling their own prescriptions.

“Epilepsy patients in general have a high rate of comorbidities like depression and anxiety, among other things, and so that’s also a challenge for this patient population especially in these years,” said Nurre, assistant professor of neurology and rehabilitation medicine at the UC College of Medicine and a UC Health neurologist. “A lot of what I do is making multidisciplinary, community, and provider partnerships to bring people together to help this population, because it takes a village.”

Nurre and her UC colleagues collaborate with CCHMC and Epilepsy Alliance of Ohio staff to hold the transition clinic once a month in West Chester, Clifton or Florence locations.

Through research including discussion with transition health care providers and patient focus groups, the team determined patients should be introduced to the need to transition to adult care around age 13 and no later than age 16. Patients meet with Epilepsy Alliance social workers at their final pediatric visit and their first visit on the adult side.

“We found that patients really wanted a warm handoff, somebody that they knew and trusted through the process of transitioning,” Nurre said. “We are grateful that the Epilepsy Alliance social workers provide an additional trusted source of information and assistance during transfer from pediatric to adult care.”

As patients begin to see adult providers, Nurre said the transition continues with education initiatives and ongoing work to set the patients up for success.

“There’s often a high rate of no-shows, medication and care gaps, and lack of skills to navigate the adult health care system. It’s a time where it’s easy for patients to get lost in the gap between pediatric and adult care,” she said. “We are working to create a more streamlined, standardized process for the patients that makes it easier for them to transfer and decrease chances of missed medications, seizures, emergency department visits and gaps in medical care.”

Clara Hartman transitioned her epilepsy care from CCHMC to UC Health when she was 21. She said the transition team helped make it a positive experience.

“They know where you’re coming from, so it’s not like they expect you to be a fully fledged adult. They know you’re coming from Children’s, and it’s really important to have somebody who understands that,” she said. “If they didn’t have such a good transition in place, I may not have kept up with my epilepsy care like I should have. I know myself, and I probably wouldn’t have followed through with setting up my own appointments and it would have been horrible.”

Hartman said even as she has taken a more active role in her care, she is still grateful for reminders and encouragement from her mom along the way.

“She’s always super supportive in making sure I make the appointments that I need to make and make the calls I need to make,” Hartman said. “It turned more into my mom asking me about it so that I can tell her rather than her just telling me about it. So she’s still active and involved in a what are you doing kind of way.”

While Hartman has transitioned to adult care, CCHMC is continuing to have an impact on her life. Her positive experience with the psychologist she saw as a patient inspired her to pursue a career in clinical psychology, and she currently works at CCHMC as a clinical research Long term, Hartman hopes to earn her PhD in clinical psychology and return to Children’s working in integrated behavioral health.

MacKenzie McCarthy became a PM&R Transition Clinic patient several months ago. MacKenzie has cerebral palsy and quadriplegia and had been treated by a team at CCHMC her whole life.

MacKenzie’s mother Geri said they were both a bit apprehensive to transition to a new care team, but they were encouraged by Clark’s approach to beginning the process when they first spoke together.

“They kind of gave us the clue that she was interviewing MacKenzie as much as MacKenzie was interviewing her, that Dr. Clark didn’t want to take on people where it wasn’t going to be a good fit,” Geri said. “The gist was they wanted it to be a positive experience for both parties.”

MacKenzie, an avid Cincinnati sports fan, recalled she was decked out in Bengals gear at her first appointment in Clark’s office and felt immediately welcomed when the office staff broke out into a Bengals cheer.

“It makes you feel very safe, and the professionals just work very well together,” Geri said. “They complement each other. They bring out the best in each other. You can just see that it’s an organized, cohesive team that’s there to support each other as well as the patient and anyone that comes along with the patient.”

In addition to rehab with Clark, the PM&R Clinic is coordinating dental, primary care, physical therapy and neurosurgery services for MacKenzie. MacKenzie has learned to become an advocate for herself over the years, and Geri said she was grateful to see Clark and her colleagues respectfully talk with MacKenzie without talking down to her.

“I’m just her sidekick it seems, and I’m fine with that because I don’t want to be that helicopter parent,” Geri said. “MacKenzie knows her body and they know that. It’s been real responsible, respectful exchanges, which is wonderful. They appreciate what she brings to the party.”

The McCarthys said it is particularly appreciated that the adult care team and facilities are welcoming and safe, from the heated garage with adequate spacing for their custom-made lift van and prominent directory signs at UCGNI to large rehab rooms that are wheelchair accessible.

“It ended up being an answer to a prayer, and all the people that we’ve met so far have been fantastic,” Geri said. “When you have a person that is disabled and can easily get sick, and you go to a facility that’s clean and spacious and you feel like they’re taking all precautions to ensure the patient and family’s safety, it means the world to us.”