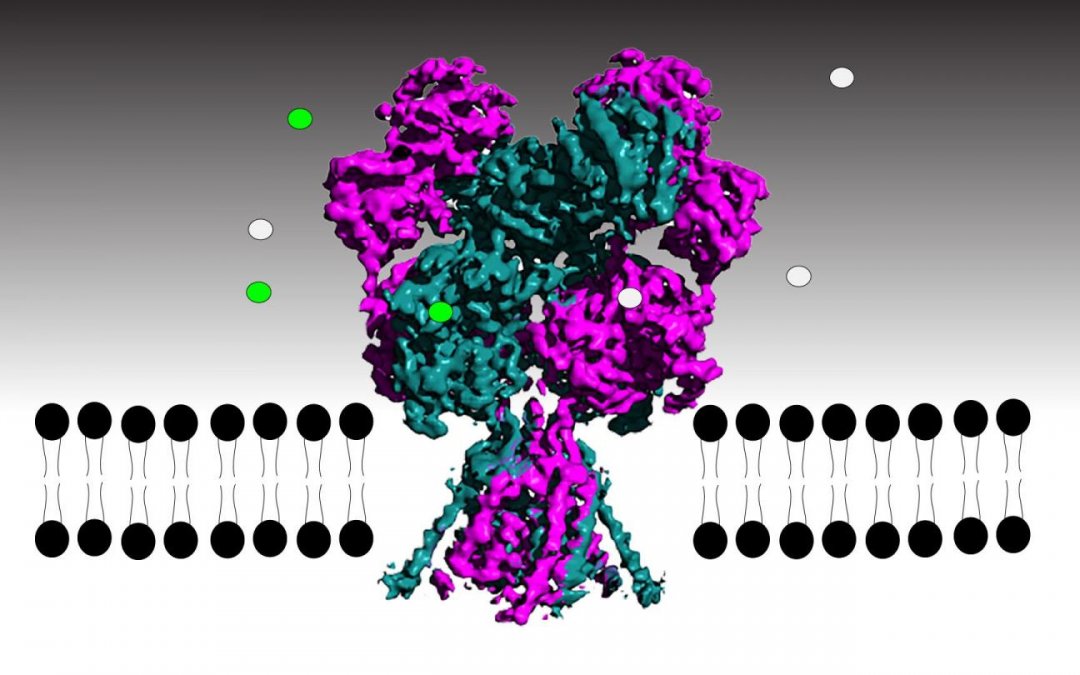 For the first time, researchers in the lab of CSHL Professor Hiro Furukawa have been able to track each atom in the NMDA receptor, an important brain protein, as it transmits or inhibits neural signals. Critical for brain development and function, the receptor converts chemical messages between cells into electrical signals within a neuron. The key to transmitting that information is opening the receptor’s built-in ion channel, a hollow pore that allows electrically charged ions to flow. Unlocking the receptor’s ion channel is like working a stringed puppet–rock one part of the receptor and slender filaments pull open the channel’s gate. Rock it a little differently, the filaments loosen, and the gate snaps shut. Understanding how the receptor works could lead to better treatments for Alzheimer’s disease, depression, epilepsy, stroke, or schizophrenia.

Using high resolution electron cryo-microscopy (cryo-EM) and a series of specially constructed receptors, the scientists were able to follow every twist and turn of receptor parts as they bind natural and synthetic compounds, rock open the gate, and let it shut again.

The NMDA receptor is embedded in the neuronal membrane with the receptor binding portion on the outside of the cell and the ion channel spanning the cell membrane. When activating molecules glycine and glutamic acid bind to the ligand-binding domain (LBD) in the right way, the LBD rocks, pulling a loop or filament attached to the ion channel gate to open it. But if an antagonist binds, the loop loosens so much that the LBD cannot pull open the gate. Furukawa says:

“This is all happening because the subunit arrangement changes quite dramatically upon binding to the inhibitor. It all comes down to the stretching and non-stretching of the loop between the ligand-binding domain and the ion channel. They’re really a series of conformations or events that are happening outside [the cell], and it eventually gets translated to the ion channel activity,”

Formerly, the stretching of the loops and their effect on the opening and closing of the ion channel were pure speculation on Furukawa’s part. Now he has the data to prove what before he could only imagine.

Watch “How does the NMDA receptor work?”: https://www.youtube.com/watch?v=5zqBsPmH8ck

This discovery will enable researchers to develop better drugs to control the NMDA receptor’s activity, which can be involved in Alzheimer’s disease, depression, schizophrenia, stroke, and epilepsy. The insights gained in this study may also be applicable to other receptor-mediated ion channels.