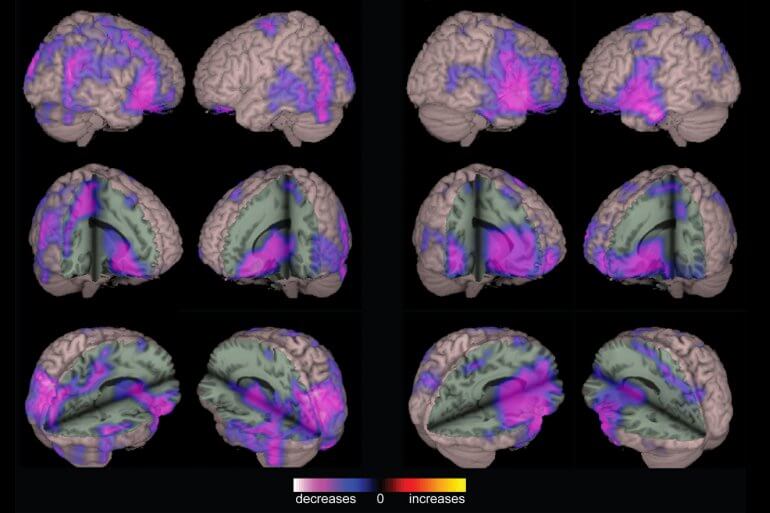 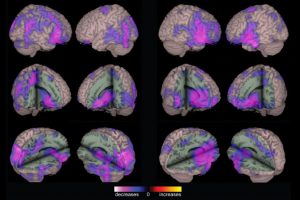 The areas in purple are the regions of the brain where connectivity is significantly lower in patients with epilepsy, as compared to well patients. The different images show the brain data from different angles. Image courtesy of Dario Englot

A new study found that patients with epilepsy have significantly weaker connections throughout their brain, particularly in regions important for attention and cognition, compared to individuals without epilepsy.

These weaker brain connections may reflect harmful long-term effects of recurrent seizures, but importantly the connectivity patterns may be used in the future to help locate which part of the brain is causing seizures, and may help doctors plan more effective surgeries.

In the study, 61 epilepsy patients and 31 controls subjects were analyzed using a non-invasive whole-brain imaging technique that detects magnetic fields produced by the electrical signals in the brain. The technique is called magnetoencephalography, and these MEG signals are used to examine the strength of connections in the brain.

Neurosurgery resident Dario Englot, MD, PhD, sought to learn what the patterns of brain connectivity in epilepsy patients may tell us about the long-term effects of seizures on the brain. The findings suggest these connectivity patterns could help predict which individuals might benefit most from epilepsy surgery.

Intervening Earlier to Protect the Brain

The researchers found that patients who have had epilepsy for a longer period of time or have more frequent seizures had the most abnormal brain connectivity, suggesting that seizures may have progressive negative effects on the brain over time. This might advocate for early aggressive treatment of epilepsy that is not controlled with medication, to prevent these damaging effects of seizures that accumulate over time.

All patients in the study had seizures that were not controlled despite several anti-epileptic medications, and all ultimately underwent brain surgery to remove the part of the brain causing the seizures. After surgery, about two-thirds of patients became seizure-free. The investigators then examined whether brain connectivity patterns could predict which patients stopped having seizures after surgery.

Knowing this, MEG studies of brain connectivity could help determine which part of the brain is causing seizures, and may help predict a patient’s chance of becoming seizure-free after epilepsy surgery.

The study, published in the journal Brain, is the product off a multidisciplinary effort at the University of California, San Francisco, including biomedical engineer Srikantan Nagarajan, PhD, neurologist Heidi Kirsch, MD, neurosurgeon Edward Chang, M.D., and several other investigators.