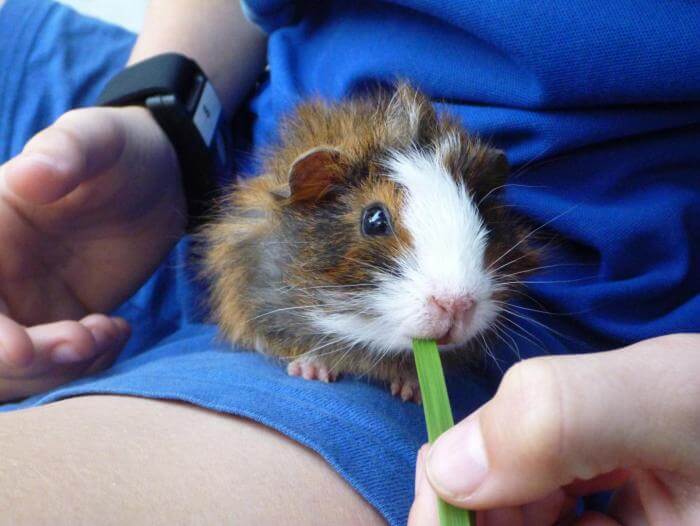 Animals’ presence may ease social anxiety in kids with autism 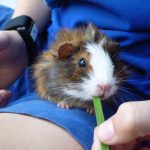 NIH-funded study could have implications for treatment

When animals are present, children with autism spectrum disorders (ASDs) have lower readings on a device that detects anxiety and other forms of social arousal when interacting with their peers.

According to a study funded in part by the National Institutes of Health, companion animals — like dogs, cats or the guinea pigs in the study — may prove to be a helpful addition to treatment programs designed to help children with ASDs improve their social skills and interactions with other people.

The study, published online inDevelopmental Psychobiology, was conducted by Marguerite O’Haire, Ph.D., from the Center for the Human-Animal Bond in the College of Veterinary Medicine of Purdue University in West Lafayette, Indiana, and colleagues in the School of Psychology at the University of Queensland in Brisbane, Australia.

“Previous studies suggest that in the presence of companion animals, children with autism spectrum disorders function better socially,” said James Griffin, Ph.D., of the Child Development and Behavior Branch at NIH’s Eunice Kennedy Shriver National Institute of Child Health and Human Development (NICHD). “This study provides physiological evidence that the proximity of animals eases the stress that children with autism may experience in social situations.”

This study is among several funded under a public-private partnership established in 2008 between NICHD and the WALTHAM Centre for Pet Nutrition, a division of Mars Inc., to establish a human-animal interaction research program to support studies relevant to child development, health, and the therapeutic use of animals.

“By providing support for these research studies, we hope to generate more definitive answers about how human-animal interaction affects health,” he said.

A guinea pig from the study. The skin conductance sensor can be seen on the child’s wrist.
Credit: Marguerite O’Haire, Ph.D., from the Center for the Human-Animal Bond in the College of Veterinary Medicine of Purdue University in West Lafayette, Indiana.

ASDs affect the structure and function of the brain and nervous system. People with these conditions have difficulty communicating and interacting with other people. They also have restricted and repetitive interests and behaviors.

For the current study, Dr. O’Haire and her colleagues measured skin conductance, the ease at which an unnoticeable electric charge passes through a patch of skin, in children with ASDs and in typically developing children. Researchers divided the 114 children, ages 5 to 12 years old, into 38 groups of three. Each group included one child with ASD and two of their typically developing peers.

Each child wore a wrist band fitted with a device that measures skin conductance. When people are feeling excited, fearful, or anxious, the electric charge travels faster through the skin, providing an objective way for researchers to gauge social anxiety and other forms of psychological arousal.

For the first few minutes, the children read a book silently, giving researchers a baseline measure of skin conductance while carrying out a non-stressful, familiar task. Next, each child was asked to read aloud from the book in the presence of the two peers in their group, a task designed to measure their level of apprehension during social situations.

The researchers then brought toys in the room and allowed the children 10 minutes of free play time. These situations may be stressful for children with ASDs, who may have difficulty relating socially to their typically developing peers.

Finally, the researchers brought two guinea pigs into the room and allowed the children to have 10 minutes of supervised play with the animals. The researchers chose guinea pigs because of their small size and docile nature — much easier to manage in a classroom than larger animals.

The researchers found that, compared to the typically developing children, the children with autism had higher skin conductance levels when reading silently, reading aloud, and in the group toy session. These higher levels are consistent with reports from parents and teachers, and from other studies, that children with ASDs are more likely to be anxious in social situations than typically developing children.

When the session with the guinea pigs began, however, skin conductance levels among the children with ASDs dropped significantly. The researchers speculate that because companion animals offer unqualified acceptance, their presence makes the children feel more secure. Whereas human counterparts inherently pass social judgment, animals are often perceived as sources of unconditional, positive support, the researchers wrote.

For reasons the researchers can not explain, skin conductance levels in the typically developing children rose during the session with the guinea pigs. The researchers believe that these higher readings may indicate excitement at seeing the animals, rather than any nervousness or apprehension.

Dr. O’Haire added that earlier studies have shown that children with ASDs were less likely to withdraw from social situations when companion animals are present. These studies, along with the current findings, indicate that animals might “play a part in interventions seeking to help children with autism develop their social skills,” she said. She cautioned, however, that the findings do not mean that parents of children with ASDs should rush to buy an animal for their children. Further research is needed to determine how animals might be used in programs aimed at developing social skills.

“Our study was conducted in a supervised setting, by researchers experienced in working with kids with autism spectrum disorders who understand the needs and requirements of the animals,” Dr. O’Haire said. She added that careful supervision was provided during the study, to ensure the welfare of the children as well as the animals.