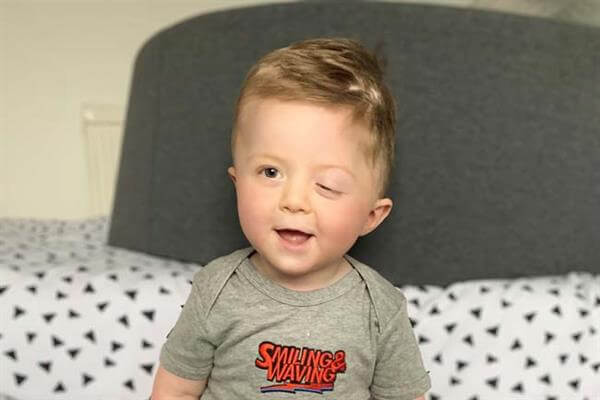 A brain tumour left my child with epilepsy

Roux Owen was just four weeks old when he was diagnosed with a rare brain tumour. He underwent extensive treatment and now lives with the effects of the disease, including epilepsy. This National Epilepsy Week, his dad Antony describes the impact it has had on the family.

Roux isn’t even three yet and he’s undergone more than 10 surgeries, has a shunt, has been left blind in his left eye, has development delays and is at continued risk of tumour regrowth. On top of all that, he also has epilepsy.

Roux’s first seizure came off the back of one of his surgeries when he was three or four months old. He didn’t have another for a while, but they started again around eight months later. He’s been on various different medications and they’ve tried upping the strength of his medication, but his seizures have got worse. We’re currently investigating further, potentially building up to surgery which would hopefully make his seizures less frequent, or possibly even stop them altogether.

We’re struggling with the idea of putting Roux through more surgery if we end up going down that route. We don’t want to lose any more of him. If Roux came out of surgery with more brain damage, I don’t know if I could forgive myself.

I don’t think people are aware of how many ways a seizure can present itself and I still find it difficult to understand what kind Roux is having. He’s had absence seizures. He’s been unconscious and had full-on convulsive seizures. He had one where he was wide awake with his arm twitching and he was trying to stop it with his other arm. There was one occasion where he took a sharp intake of breath and just stopped moving. I thought he was gone. It was terrifying.

That’s one reason I’m so keen to share Roux’s story. To raise awareness of the fact that epilepsy doesn’t just take one form.

My wife Amy and I are getting better at spotting the signs of a seizure. When they first started, we were getting up every hour in the night, taking it in turns to check on Roux. It was absolutely exhausting.

We’ve bought a video monitor, as well as heart rate and oxygen monitors. We keep a constant eye on him. After Roux goes to bed, we sit on the sofa surrounded by these monitors, watching him on the iPad to check he’s ok.

At the moment, I’d say Roux’s epilepsy is harder to deal with than his brain tumour recovery. At least with his brain tumour, we know when the next MRI scan will be. We know that if there are any signs of growth, we’ll treat it. But there’s no rhyme or reason with his epilepsy; his seizures are so unpredictable. I’m terrified he’ll die in his sleep.

Despite everything he’s been through, Roux is such a happy little boy. He’s very talkative with the noises he can make and is showing signs of crawling. He gets frustrated sometimes and it’s horrible that we can’t explain to him what’s happening. I think it will get harder when he gets older.

It also affects his big brother Noah. He knows Roux has a ‘poorly head’ but we try and protect him from the rest of it. Thankfully, Noah has never seen Roux have a seizure, but he sometimes asks questions like why can’t Roux walk yet when his friends’ younger siblings can. It’s tough but he’s getting some great support at school.

The boys have an amazing relationship. Noah is so good with Roux, who follows him everywhere. Roux’s favourite thing is to go on the swings in our garden and Noah will push him or swing next to him for hours.

Amy started using Instagram to share Roux’s journey. She set up the @RouxsArmy page and it really helped her. It was a way to compartmentalise what was happening with Roux’s brain tumour journey and to move forward.

When you have a poorly child, people tend to deal with it one of two ways. Some people will stop contacting you because they don’t know what to say. Others are constantly asking for updates and you find yourself sending the same message over and over again. Social media is a way to keep everyone updated.

I also use Twitter to update people on Roux’s situation and to raise awareness. Connecting with others who’ve gone through something similar is a comfort and it gives me hope. People tell me about their child who was diagnosed with a brain tumour at a similar age to Roux and the things they have gone on to do, like graduating from uni.

We don’t know what Roux will go on to do, but having that hope is so important.

I receive messages from people from around the world telling me that Roux’s story has helped them put their own life into perspective. It’s touching to know that Roux gives others hope too.

We do have bad days when we ask ‘why us?’ Sometimes it can feel like we have no luck, and it’s easy to wallow. But those connections I’ve made help with that too. I think of those who have lost their lives to this disease – especially young people – and I realise that, despite everything we’re going through, we are lucky.

We still have Roux.