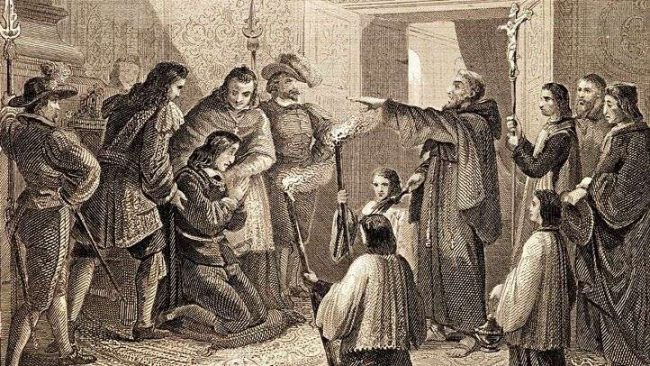 Patients with mental illness have been exposed to extreme—and at times inhumane—treatments throughout history, from lobotomies and electric shock to bleeding people out in the 16th century.

Here’s a look at five of the most extreme methods of treating mental illness in history, and how some have led to more legitimate techniques for current treatment options.

Bloodletting is an ancient medical practice that began roughly 3,000 years ago in Egypt, but has become most synonymous with its usage in the Middle Ages, as documented in an article published in History.

Before human anatomy was completely understood, scientists believed the body was made up of four humors (liquids): blood, urine, black bile, and yellow bile. If all four humors were balanced, it meant you were healthy. An excess of any one of them signified illness; bloodletting was a common treatment for this supposed “imbalance.”

To administer this treatment, a lancet (a small, razor-like blade) sliced open the skin, followed by cupping, which involved placing a dome-shaped glass over the wounds and using its suction or prior heat to extract the air. An alternate method for this also used leeches in lieu of cups, whereby an average leech extracted 5 to 10 ml of blood.

This practice ultimately became obsolete due to its dangerous side effects. Large quantities of blood loss often led to respiratory problems, fainting, or infections as a result of unclean blades. Death or hemorrhagic shock resulted as well.

According to an article published in Blood Transfusion, bloodletting is used very rarely nowadays—only for rare conditions such as hemochromatosis, polycythemia vera, and porphyria cutanea tarda.

This came to light after archeologists discovered ancient skulls that were circularly fractured and full of holes—a direct result of trepanation, according to an article published by Mental Floss. But what is this antiquated term, and is it still used today?

In ancient days, mental illness was believed to be caused by the presence of a demon or evil spirit within the body. Doctors drilled “doors” into the skulls of mentally ill patients as a way for the demon to escape the patient’s brain.

Despite being ineffective from a scientific standpoint, trepanation persisted as a popular treatment for mental illness until the early 20th century. Although it is not widely practiced today, it is still purported by organizations like International Trepanation Advocacy Group.

First performed by neurologist Egas Moniz in 1935, a lobotomy is a medical procedure meant to “cure” all mental illness through the insertion of sharp instruments into the brain. After these holes were created, pure ethanol was poured inside them to destroy neural connections to the frontal lobe—the part of the brain responsible for higher cognitive functions like memory, problem-solving, and emotions, according to a 2022 article published in PsychCentral.

Some patients reported signs of improvement, but others were left with permanent brain damage, and likely even more with mental trauma.

Although this procedure hasn’t been performed in the US since 1967, it was popular in the early 20th century. Lobotomies are still technically legal in the US, but a more refined type of psychosurgery called a cingulotomy is now used in its place, as noted by PsychCentral. A cingulotomy targets specific areas of brain tissue for patients with severe obsessive-compulsive disorder who haven’t responded to previous treatment.

Henry Cotton, MD, served at the Trenton Psychiatric Hospital in New Jersey for 26 years during the early 20th century, and was known for the highly experimental treatments he performed on the mentally ill. He believed mental insanity stemmed from untreated infections in the body, and frequently extracted patients’ teeth to purge their illness, as recounted by All That’s Interesting

When extracting teeth proved unsuccessful, Dr. Cotton began removing other body parts including tonsils, gallbladders, ovaries, testicles, stomachs and colons. At the end of his time at Trenton, he had removed over 11,000 teeth and performed 645 major surgeries. In the 1930s, an investigation by the director of the New Jersey Department of Institutions and Agencies put an end to his practices.

His work is of note as it’s an example of “progress” in the wrong direction; whereby he seemingly reduced a patient to their illness instead of viewing them as a person.

In the late 1920s, Hungarian pathologist Laszlo Meduna introduced a type of specialized therapy for patients with schizophrenia. He believed schizophrenics would be calmer and happier after having a seizure, such as was observed in patients with epilepsy after convulsions, according to an article published in The British Journal of Psychiatry.

Dr. Meduna used metrazol, a chemical that stimulates the circulatory and respiratory systems, on his patients. His treatments, although less inhumane than previous methods, were still highly unsuccessful. As noted in British Journal of Psychology, only two of his first five patients showed improvement after treatment, but there is no direct evidence linking this to Dr. Meduna’s practices.

Even so, Dr. Meduna influenced the discovery of a more stable and effective form of convulsive therapy: electroshock. Meduna’s methods were quickly abandoned, perhaps for the best.